The company covered in this case study is a European tugboat company. The company tries to provide the best service to its customers with flexibility, efficiency and safety at the heart of their towage services. In order to achieve this, it is very important that the tugs are in top condition.
This study describes what the problems were for this company, why it opted for the sustainable Ultrasonic Anti-Fouling Systems of Lamers System Care B.V. and shows the results. 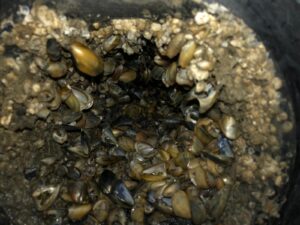 The tugs sail almost exclusively in salt water, which makes them very sensitive to fouling. It is very important that the powerful engines are efficiently cooled.
The tugboat discussed in this case suffered from heavy fouling in their seawater inlets, strainers and crossover for years. This meant that the cooling system had to be cleaned regularly, which is a pricey and time-consuming process. The downtimes created by this also mean that the ship cannot perform any work and therefore cannot generate income.
The company has tried multiple Marine Growth Prevention Systems (MGPS) on its ships. Fouling was somewhat reduced by some systems, but it remained a recurring problem. After varying results it was concluded that still no suitable solution had been found.

There is a curious phenomenon: large mussels in the crossover, which cannot pass through a seaweed pot. How is it that such an amount of fouling is still present, behind the filter? The photo is a representation of the inside of the crossover, after a valve.
Bacteria and other organisms are carried along by the flow through the cooling installation. The strainer functions as a filter, but does not collect these tiny particles. For example, larvae of mussels, for example, flush with the seawater through the holes in the filter and attach themselves to the inside of a crossover. Then these grow into adult mussels.

The Ultrasonic technology developed and perfected by Sonihull has existed for more than 15 years and is used in various sectors to clean objects or surfaces and thus also to combat fouling.
Ultrasound is used to bring a surface into resonance. It creates a pattern of increasing and decreasing pressure that follow each other very quickly: sound waves. In the negative pressure at the microscopic level of air bubbles will arise. These then implode in the upper pressure of the sound wave, which fights single-cell bacteria.
The adhesion of these bacteria to a surface is the first phase of growth and is called biofilm: a slimy green layer. This biofilm forms the foundation for larger organisms, such as the larvae of mussels, barnacles or tube worms. Due to the prevention of the biofilm layer, these organisms have no chance of attaching themselves to a surface such as the inside of a crossover or a strainer.

The Sonihull8 control unit can be connected to both 110-240 VAC and 12-24 VDC. If both are connected, the system automatically selects the VAC (shore voltage) and when this is lost, the system automatically switches to the VDC. If the battery voltage becomes too low, the system switches off automatically to save the battery.
The control unit is programmed in such a way that the transducers run the same program every time. As a result, the transducers produce pulses every few seconds with a range of frequencies between 20 and 60 Kilohertz that are not audible to the human ear. When this program has been completed with 20 different frequencies, the program starts again.

The transducers consist of a piezo element that is enclosed in a housing produced by means of injection molding. The transducer is then screwed into a pipe adapter or transducer ring with some Molykote BR2+ (industrial grease), which is glued with a strong two- component epoxy.
In this case the pipe adapters and transducer rings are glued on a crossover, strainer and seawater inlet. Because the bottom of the transducer is not glued to this surface itself, but the ring or pipe adapter is, the transducer uses this ring or PA as a grip so that it can distribute firm taps with its impulses.
This is many times stronger than a transducer that is itself glued to a surface. This results in a better sound transmission, so that the surface is brought into resonance better and thus a stronger effect of the ultrasonic effect takes place.
The pipes have an amplifying effect that can be compared to a trumpet.

Where the tug regularly had fouling in its crossover and strainers after 3 months, this has not been a problem for at least 13 months after the Ultrasonic Anti-Fouling System has been installed.
The installation has ensured that the tug’s engines and auxiliary systems remain efficiently cooled with seawater, there is no loss of cooling capacity over time. This ensures that the lifespan of the engines and other systems is extended and that less maintenance is required on the cooling system. This effectively reduces the number of dry docks for this tug.
With the choice of the durable Ultrasonic Anti-Fouling system, the company is also taking a big step with regard to environmental friendliness.

Strainers during the 2 different inspections (December 2019 and September 2020).
The only fouling that can be seen is a remnant of the fouling that was already there before the Ultrasonic Anti- Fouling system had been installed. As can be seen in the pictures, this growth has not worsened in 10 months.

Keep your ship free from fouling 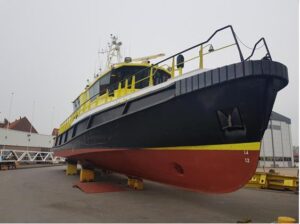 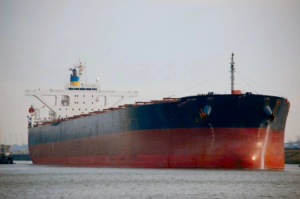